They say life is a gamble. But whose life? One with divine origin or one rooted in doubt, foolishness and laziness? For a second, take a look at the shared link and see why you can stop saying that and see the impending disaster if not nipped in the bud immediately.

My life and yours is not a gamble, it’s intentional! My thoughts aloud…

Or what say ye?

No need for plenty story!

When will you understand that #90Bill is a secret for you to enjoy and see the rewards?

If this is true, it is thought-provoking. I wish you could forward it to every youth known to you, so they can have a piece of it. And let the sleeping giants rise.

“My Dear Nigerian Youths”, by Anonymous.

I am very angry and that is why I am addressing you.

You are the source of my anger and I want to vent my spleen- maybe not at you directly- but at the arrogance of your ignorance.

You sit in front of a computer and rant all day through social media but with every click, you make money – not for yourself – but for Mark Zuckerberg (Facebook).

With every megabyte of data you spend complaining and maligning, you make stupendous bucks for Etisalat, Glo and Airtel.

Over the next two years, the number of Nigerian millionaires will jump by 47% but most likely you will not be among because you are too busy whining and complaining. And yet about 60% of Nigeria’s 170m population are below 35 years. Oh, what a waste! By the way, Mark Zuckerberg was 19 when he started Facebook.

Africa’s youngest billionaire, Ashish Thakkar, is 31. He escaped from the Rwandan genocide and relocated to Uganda where he started an IT business.

Collin Thornton, who made his millions by fixing bad computers and setting up Dial-a-Nerd, is 35.

Adam Horowitz, an 18-year-old entrepreneur, started 30 websites in 3 years before he became successful.

The only thing you have ever started is an online petition. Have you heard of Jason Njoku? He’s 33 and the founder of Iroko TV. He received $8m investment into his company just a few years ago. What he does? Sharing the same Nollywood films that you spend hours to watch online. He didn’t just hang around waiting for Buhari to make something happen or blaming Jonathan for not making anything happen.

Kamal Budhabhatti was deported from Kenya but while on the flight, he thought of the opportunities in Kenya. He found his way back after 6 months and today his company is valued at $30m. He’s 36.

Have you heard of Chinedu Echeruo? Apple just paid $1b for his app. He’s a Nigerian like you and all he did was attempt to fix a problem. But for you, the only thing you attempt to fix are your nails- and your hairdo! Chinedu moved to New York in 1995 and found it difficult to navigate the city with ease so he developed HopStop to fix the problem.

Stop listing all the problems – we know them already but what are you doing about them?

Awolowo was 37, Akintola was 36, Ahmadu Bello was 36, Tafawa Balewa was 34, Okotie-Eboh was 27 and Enahoro was 27 at the time of independence of Nigeria.

It brought in Yakubu Gowon as Head of State at 32 and Olusegun Obasanjo at 29.

You are in your 40s and you still sag your trousers.

Of course, you know Linda Ikeji. You’ve spent hundreds of hours on her blog laughing and commenting while she smiles her way to the bank.

She’s just built a house for her father in the village- just by you clicking on her gossip and sharing.

Your day is not complete without a stop by at her blog. She was as broke as you are but she turned a hobby into a business.

Are we void of understanding?

You think those politicians have real plans  for you?

That is why I referred to the arrogance of your ignorance at the beginning of this diatribe.

You have a false estimation of yourself. You have an over bloated ego.

With God it is never too late to ARISE. May God’s fatherly intervention re tune the mindset of every youth in Nigeria..

A friend sent this to me & I couldn’t resist the urge  to share ….We need a divine generational turn around.

Starting with me or you if you want…

Some might find this very article particularly controversial. Especially when the need to classify and “polarize” has been taught as the very fabric of our nature.

Until we understand the very idea of these men, Einstein and Jesus, we only then live in the black and white world. Like literally, no “coloured” habitat! Forget the technological advancements we as humans have made in colour nomenclature, telecommunications, photography and television/smart displays… We somehow forgot ourselves behind and got into less than a particular number of categories. We managed to name over 20,000 apple species, 340 dog breeds, 36-38 cat types yet grappling with numbering whether to classify ourselves as species or races or languages or colour or whatever. Mind you, there are over ten million colours distinguishable by the human sight and only five hundred yet named. Also remember that somehow as you climb the pyramid of life, it is either one or the all. Again, masters or slaves, good or bad, poor or rich, always looking for where to belong…

Back to the important ideas; Einstein summarized time and space as no longer two distincts but one single spacetime fabric, and Jesus likewise declared, “…the twain shall become one” and later said with clarity, “…the way, the truth and life..” All one!
So here comes the spell. Wait for it!
Oh! Sorry, for the sake of academic reference and no plagiarism, find the spell references below also insightful…

Then Isaac his father answered, Your [blessing and] dwelling shall all come from the fruitfulness of the earth and from the dew of the heavens above; By your sword you shall live and serve your brother. BUT [the time shall come] when you will GROW RESTIVE and break loose, and YOU SHALL TEAR his yoke from off your neck.
Genesis 27:39‭-‬40 AMP
http://bible.com/8/gen.27.39-40.AMP

In essence, the white-blacks and the black-whites do have to GROW RESTIVE, take Responsibility and decide to be Productive for ourselves while making Quality the watchword.
Maybe until I prove my theory of everything and that all is one and one is all somewhat “scientifically”, maybe then you’ll understand the INFINITY we live in.

Sources: The Bible, my S.H.A.P.E. (hopefully speak on this someday), Google and Wikipedia.

Side note:
Ehen? Haba, lemme alone, it’s the truth, someone had to say it!

By 2nd of June, #90Bill of the public, funded by the public, for the public hereby pronounce Oluwasegun Neto as Nigerian and First 9gerian Private Hero 2016.

Celebrate him and remember #90Bill states that “It is a social crime to give less than 90% quality or take less than 9/10  as a Nigerian in every way“. It summarises your Right as a Nigerian to Productivity and Quality.

With Video having over 9,000 views (click link to see his video) and >9/10 creativity and ingenuity, Oluwasegun Neto has the right to invoke the #90Bill in his business. The Right to Productivity and Quality. Congratulations! 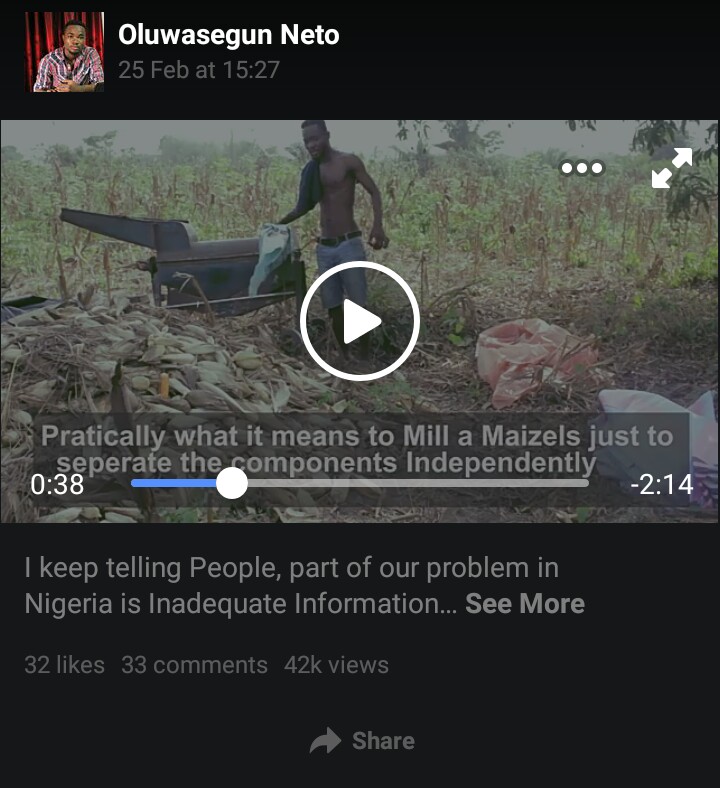 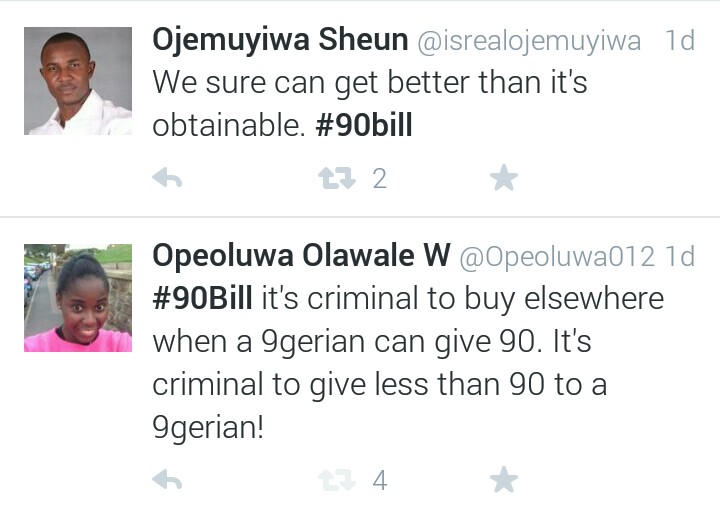 Nominations are by public votes.
Be a #90Bill Hero not Zero.

Beauty attracts men but wisdom keeps them.
Well, handsome men get noticed easily but brightness of mind sticks out the best
Elegance catches men’s attention but intelligence convinces them. Same goes for the ladies
Nagging irritates men but ‘constructive silence weakens them. In a similar manner will carefully demonstrated calmness woo her.
The ‘boy’ in every man pumps out occasionally, the ability to handle this is a woman’s truest maturity. That ladies are babies even plays out some time but the “men” know just how to pamper his “baby”.
Men have secret struggles and silent pains, should you ever find them out, you have exhibited the greatest maturity. Tell the man that does same how awed you are by his “manliness”.
In the long-run, your ‘words’ matters more to your friend than your ‘looks’, so invest the right words.
Earn the respect and you will be considered the yard stick for all actions.
Learn to mold the moods of your friend. People will naturally give u their futures if they can recall your maturity in yesterday’s issues…
People are everywhere but royalty are scarce. Let the king in you come alive and you will be held in high esteem.

#Y.O.U (For the one who knows you, what you want and how to get it)
This is for YOU
Happy birthday to my guardian angel…in human form.
Olawole Olawale.

Whether dependent or interdependent or independent as Nigeria and Nigerians, happy Independence to our country Nigeria. May we all find peace, hope and fear of God. Amen, Selah!

I don’t know what you are thinking about right now but you might to learn a lesson or two from the “write” link below.

In fact, just read both!

There are no accidents even in the face of seeming accidents

Dreams are for a reason

If we don’t try we never know

So why are you upset? Maybe I surpassed in the history of sucking?

Yesterday is history, tomorrow is mystery, today is a gift and that’s why it is called present

There’s just news; not good or bad. Only depends on what you do and believe

To make something special, you just have to believe it’s special

There’s no secret ingredient to life or fulfilling destiny, it’s just you!

You really continue fulfilling destiny until you find inner peace…